We have been under a state of alarm for over a month in response to the COVID-19 healthcare crisis, which has forced most of the population into lockdown and has ground practically the entire economy to a halt as a consequence. This decision, absolutely necessary to help curb this public health crisis, had to be taken very drastically, partly because it took so long to implement and partly because there was so much initial reluctance to the required social distancing, as I noted in my 11 March blog post. And the consequence is that this situation may now potentially go on for a long time, with the subsequent drastic impact on both the economy and society.

As I commented in last week’s post, now is the time to start looking to the future and prepare to face a new reality. How long it takes to get through this crisis is up to us and we have to put aside what separates us and focus on what unites us. Well. It seems that our leaders aren’t entirely sure about which path to follow, and even contradict each other in statements and actions, which slows down decision-making. However, I would like to positively underscore how Ximo Puig, President of the Community of Valencia, holds video conferences with business leaders and, in an “exercise in realism” about the COVID-19 crisis, publicly acknowledged that recovery is unfeasible without private initiative. Completely impossible. I’m delighted to hear it because, ever since i started posting on this blog, I have emphasised that ongoing public/private partnership is crucial, despite attacks from the usual populists.

But governments are now going to have to face a harsh reality: more than three million people affected by Temporary Redundancy Plans (ERTEs for their Spanish acronym) today, hundreds of thousands of small businesses on the brink of closing forever, tens of thousands of families who have seen their income disappear overnight, and public coffers which, already heavily indebted before the crisis, are now going to have to handle an unprecedented situation. “You have my full support (…) and within my power, we are going to support you in the projects in progress to overcome this situation”, Puig assured the entrepreneurs. It is a pleasure to hear these words from the President of the Valencian Government. As head of Ribera Salud, the company that has worked most closely with the administration, these statements give us a sense of support.

Now it’s time to put words into action. Good intentions fall short in a national emergency like this. All of us, public institutions and private initiatives alike, must work together now more than ever before. In fact, this has always been Ribera Salud’s desire. It’s part of our DNA. This desire to serve our community, to put the public interest first and to guarantee the best health care, was the basis for the creation of Ribera Salud and the launch of Spain’s first hospital based on a unique model of public/private collaboration, the Hospital de La Ribera.

Incidentally, two years after this collaboration ended, it has become clear that the reversal of the Hospital de Alzira has been a disaster. I’ll discuss it in depth in another post. But it’s clear: Every reality that is ignored seeks its revenge.

And returning to the public/private collaboration that President Puig noted: at Ribera Salud we have not only always defended this model but also the transparency and periodic evaluation of quality of care and healthcare outcomes. And coincidentally, the Audit Office of the Valencian Government has always valued the strength and advantages of this collaboration. The latest report on this subject has focused on the Hospital Universitario de Torrevieja, and its conclusions leave no room for doubt about its advantages. The surgical waiting list in Torrevieja is four times shorter than the average hospital in the Community of Valencia, its sound management translates into a savings of €45 million a year on public spending, 85% of its patients are very satisfied with the care they receive, and private initiative has invested €105 million in this health department to date.

Moreover, we now have to add that it is one of the hospitals that has emerged as a social leader in the fight against COVID-19 and has demonstrated the strength of the public system, contributing effectively to the recovery of many patients while providing for the safety of its professionals, and not surprisingly, it is one of the hospitals in Spain with the fewest cases of infected healthcare workers. So, yes. The Hospital de Torrevieja has also demonstrated the benefit that this public/private collaboration brings to society during a health emergency like the current one.

I’m confident that the President’s statements are more than just words and will be translated into concrete actions. And from this blog, I once again reach out to our leaders to continue working to build an excellent healthcare system in which the public system, including direct management and private collaboration, becomes increasingly stronger and seeks to join forces with others. From a place of commitment, responsibility, and serious decision-making, together we will be able to face the challenges of the 21st century and the tough times like the one we’re experiencing now. 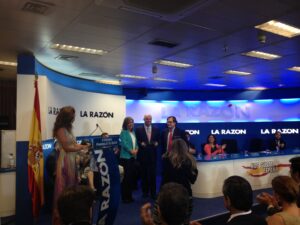